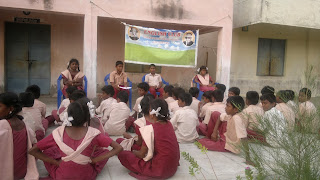 My experiences and strange encounters with students..

After four TRB exams and four interviews I have got my posting in a rural school as BT English. When I reached the school it was functioning mostly under a tree. Only ninth standard and tenth standard had classrooms. The remaining standards shared a public hall and the shade of a tree.


The public hall was strange it had boards on its walls. It was on the banks of a small pond. There was also a temple. In the initial days I found that the pupils had problems in oral reading. I thought it would be better if I write the entire lesson on the blackboard and go letter by letter. Though it was sixth grade I thought it would be a better practice. It might give the pupils the ability of oral reading. They found it much easier to match the sound with the symbol. So the first week was spent in this manner.

The next Monday I tested the attainment of the children. There was a significant improvement in pupil’s oral reading ability. One particular girl Susan was reading the lessons very fluently. I was very proud of my efforts. I boasted to the children that I made her read fluently. Then they told me something that shook me from my head to toe!

“Sir, she was absent during your practice reading sessions”.  I couldn’t believe my ears. How on earth a girl form such a humble hamlet read English in such a fluent manner? Then came the second shock. “Sir her name is Susan. She could read anything in English”. I started diagnosing the statement. I gave the seventh grade English text book. She read them. She could read 10th grade English book as well. I was thunderstruck. I started a case study. She was the 7th daughter of a poor couple. She had 2 younger brother and 9 sisters. Somehow she deciphered the ability to read English.

That was an unforgettable day of my teaching career. I took special care of her. After the annual holidays she stopped coming to school. That drove me mad. Luckily the SSA people encouraged hunting of the school dropouts.

I took one of students with me and located her home. Her father yielded to my pressure. She was back in 7th grade. But I had to hunt her in every reopening. Thank God she made it to 10th grade and made it with 325 of 400 marks.

I wonder how many Susans out there go unnoticed and dropped out of school. All I can do is pray.
PS : Susan stopped schooling after 10th standard. Now she is grazing her dad’s sheep in her village. Her younger brothers are here with me in the school.
Names have been changed for obvious reasons…