PROUD TO BE AN INDIAN 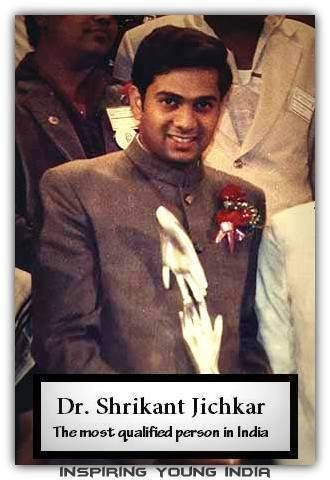 The record for most qualified person in India was held by a politician Dr. Shrikant Jichkar (pictured). He was an ex-IAS&IPS, doctor, painter, pro photographer, actor, active ham radio operator and youngest MLA at 25, who once held 14 portfolios. He had 20 degrees, won 28 gold medals & had a library of 52,000 books.

He has been a member of

2. Maharashtra Legislative Council, 1986–92 and Minister of State, Government of Maharashtra. He was also a member of Rajya Sabha. He joined I.P.S. in 1978 and I.A.S. in 1980. He has been recipient of ‘Ten Outstanding Young Persons of the World Award in 1983. He was also listed in the Limca Book of Records as the most qualified person in the country.

He traveled all around India speaking on health, economics and also giving religious discourses. Jichkar was an active Amateur radio operator, and used the callsign VU2SJA.

One of the numerous subjects in which Jichkar had an interest was astrology and he claimed to be able to analyse the movement of planets in a horoscope down to the last detail.


PROUD TO BE AN INDIAN fb page