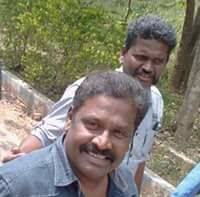 Pudukkottai Arunmozhi and Manikandan
When Governments fail people, they are left orphaned and defrauded. Most of them choose to be silent. But their silence is very heavy. People do need someone to act and channel out the public anger against the corrupt system.

Mr.Arunmozhi and Mr.Manikandan are daring duos always ready to jump into action. Very recently they have organised a large pilot group which served as the core team for the Jallikkattu Protest (Ban Peta).

Now the duo is swift in gathering the public support and guide them to funnel out their anger against the Hydrocarbon Project.

Amidst the turbulent events of the legislative assembly, the centre had signed the agreement and sanctioned the Hydrocarbon extraction project. ONGC has started testing the areas around Neduvasal for Hydrocarbon. If this project is allowed to proceed the whole district will become a modern desert.

Both Arun and Mani knew the gravity of the situation and immediately leapt into action.

It is very rare to see such kind of social commitment among the common folks. We wish them good luck.
hydrocarbon project at Neduvasal