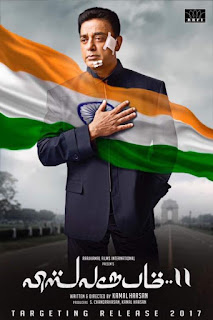 I wonder how many of us remember the veteran actor Nasser as a Film Maker, when ever the I listened to the musical master piece  "Thendrel vanthu theendum pothu" from Avatharam one of the best movies in Tamil Filmdom, I remember him.

Nasser was persistent on making lofty movies beyond the acceptance of the audience, his movies were not received properly, these sort of setback freed Nasser from directing films, in fact he could not afford to make one.

On those days one of the critics had written that Nasser was determined to make lofty movies, without any care for ordinary film goer. However the financial realities silenced the director in Nasser.

But in the case of Kamalahasan it is a different story, no matter how hardly he was hit he never bothers to make films that he believe in. Pays little care to make his endeavors understood and celebrate. His successful career is dotted with such films, Rajaparvai, Guna and the like.

Particularly Guna, the film was not received by the audience to the expected level, but even today it is celebrated. The whole story hung with a noun Abirami, when Kamal was asked about it, he very coolly replied those portions were cut off due to the length of the film.

It was a horrible shock for fans like me, the whole story was revolving around the unknown girl "Abirami",  she in fact was the key character in the course of the story, yet her roll remains a mystery, and the maker just says he had cut the portions about her. This kind of creative licence can only be enjoyed by Kamal.

Viswaroopam 2 is a pioneer in the technologies which had gone into it, the story itself is a mythical labyrinth. In simple words this movie is yet another bold statement from Kamal, "It is my movie, I don't care if you enjoy this or shatter this. This is what I am as a creator, this is my product."

Definitely it is not for the common audience yet die hard fans may celebrate this flick.

Let us see the brighter sides of the movie.

The first action sequence Gowswamy's  car plunges down the valley is astounding, despite the poor cinematography  CG scores, as the car rolls down, Kamal is thrown out and rolls along side the plummeting car. The out is awesome, for I enjoyed rides right from "The Italian Job" FSeries, MI series and this plummeting car of Viswaroopam stands head and shoulders above the rest.

Hats off to Kamal.

Andrea Jeremiah, what a devil she was, always enthralling,  giving  her full energy to the character she takes. She is really a devil. Offering her best film after film, honestly I was taken aback when I saw her in Tharamani, really a hard role, she had came out flamboyantly. 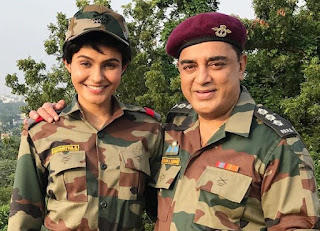 In this flick too she had proven her mettle and made Kamal proud in his choice. Her character will be remembered for its unexpected gruesome death.

As usual Rahul Bose stuns as Omar with his allies and with his broken voice able to drive icy chill into the audience. One more thing, when Sekar Kapoor is on the screen he outshines the rest  believe it, this  includes Kamalahasan too.

The inclusion of SS Richard Montgomery is great, at this point Kamal proves his ingenuity, further more this movie should not be a True Lies to London.

Though it is made by the veteran actor Kamal, the movie lacks the crispness, the screenplay was written in a rush and too much compromise is made to marry the first part with the second.

At no cast we can justify the outrageous involvements of Pooja Kumar, diving deep too diffuse a bomb to save London, and involving in all the missions to assist her husband who is a top class spy. Sometime it is hilarious to see her in action, what we should appreciate is her killer looks.

To add fuel to the fire whenever she delivers a dialogue she adopts to the stinky brahminical accent.

The posters say Gibran is the composer, but is he there in the film...or the speakers of RKP Pudukkottai had gone obsolete I am not sure.

The movie opens with a show reel attached to it in the beginning, Kamal gives a speech about his new party Makkal Neethi Maiiyam, and he had toured the lengths and breadths of the state. I was annoyed is this just, is this correct to mix up his own political ideas in his movie?

But our history has answers as always, do you remember the famous dialogue writer come Dravidian Political Icon giving  an elaborate speech before the movie Poompukar unfolds. Whether we like it or not history repeats itself.

Audience are least bothered about the show reel, but the government is not, a thasildar rushed into the theater to check out the success rate of the movie. I have never seen such a thing in the past 30 years, a revenue official visiting a theater and inspecting the ticket sales and inquiring the movie's reception in all the other theaters around the state. Might be pleased I hope!

Though the movie excels in the tech details and techs it had used the cinematography is not as I expected, for I was the one who ran with Kamal inside the forest along with PC Shrirams cam. What a blunder?

As for the tech advancement the underwater stunts were filmed in land! The same tech used by Guillermo Del Toro in his Shape Of Water.  Actually Kamal is his predecessor in using this tech. He had used it few years earlier to Guillermo and end up in a layered flick which is incomprehensible for normal audience. Where as Guillermo has got an  Oscar.

Why do people like me are very disappointed with V2?

Guess what, we expect more from Kamal, We want him to carve our presence in the international cinema, when he fails to go this far we feel disheartened and lament here in blogs and reviews.

Only for the die hard fans and his party men this is Vishwaroopam for rest of us it is Vamana avatar. 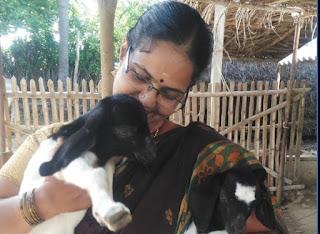 During this accursed days of the pandemic few individuals stand head and shoulders above the rest, Parvathi Shri is one among them, she is known for her active participation in Wikipedia contribution, an excellent teacher and a need of the hour social activist. She is also a friend of Shajahan from Delhi, a person whose name comes to our mind during a disaster.
Parvathi Shri started her service to the needy during this lockdown on 13/04/2029, she began her service from her own funds and started to feed 50 hungry souls, later her friends joined hands with her and the number of beneficiaries grown to 200.
Saffiullah, one of her donors emptied his account and transferred until his last penny! I have never known him in person, but people like him make the unbelievable happen. May his lord bring him prosperity and peace.

She had provided rice bags to all her 300 hundred of her students, and several cleaning staff with the help of Pugazhenthi Sivaji, from North California,  Dhananjayan Krish…
Read more