Showing posts from March, 2019
Show all 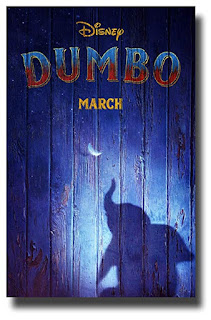 Dumbo - The flying elephant calf hit the theaters this week. Tim Burton's remake of Disney's 1941 classic version of Dumbo has close resemblances to the old one.

I had a chance to watch this movie in real 3 d version. But I was not immersed in the scenes. Some how the advancement of the 3D tech has taken away the thrill of 3D. The format  some how failed to send cold signals down the audiences nerves.

The VFX is wow kind, little Dumbo's eyes are so expressive thanks to it.

The entire story is set around 1919, making it one of the period movies when Circus tents attracted an entire town and how the trade slowly became obsolete and movies flooded to fill the vacuum.

In the initial portions Dumbo pulls some serious sentimental strings but fails to maintain it. Tim had decided that one silhouette of Collin Farrell sitting in the dusk watching his severed hand is enough. It was the only place in the movie that we feel sorry for him and to sympathies him. Later parts too we reg…
Post a Comment
Read more
More posts