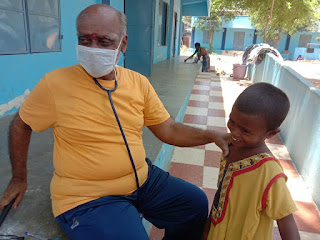 Dr. Ramdass is the name which comes to any Pudukkottaian's mind, for he is involved in several welfare activities, which includes running a scholarship programme, serving as a patron of Ramalinga Adikal School for Orphans, maintaining the district crematorium, cremating the abandoned bodies with proper rites it is such a long list of activities,  he had been doing this for more than a decade.
Really a great soul.
He visited the children at the Covid-19 camp, supplied massive amount of rice,  was really a great inspiration to all the volunteers.
His Highness Karthik Thondaiman 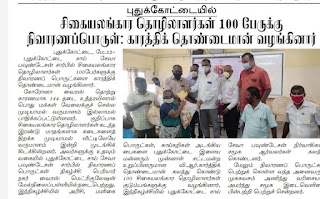 His Highness Karthik Thondaiman is the royal prince of the Pudukkottai State, he was one of the active field workers of the Covid-19 disaster. His loyal followers like Bell, (Ex. Ward Member of Periyar Nagar) were assisted  by him. It is really sad that he had lost in the Election, yet he decided to assist the people.
JBR Bell 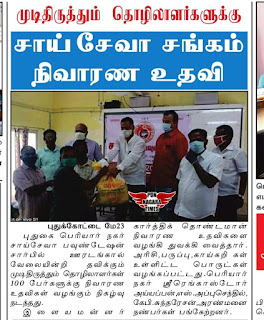 Bell is one of the top volunteers of the district, if Cuddlore is struck with a cyclone his vehicle will be the first to leave Pudukkottai towards Cuddlore. He had taken part in Chennai Flood Relief Materials Distribution, Gaja Cyclone Rescue operations and as usual he had taken part in the Covid-19 rescue too. He traveled to Alangudi to collect five hundred kilos of rice which is arranged by a higher official, who refuses to revel his name. Imagine a drive from Pudukkottai to Alangudi in a TATA Ace vehicle during the strict enforcement of  law! Yet Bell had managed to do that, he brought all rice distributed to Udaiyaneri Colony, an area which is politically abandoned, and administratively orphaned.
During the distribution the people literally cried thanking the volunteers, Bell and Abdul Jaleel.
DYFI Narayanan and SFI Vicky
They are the one among the first teams to bravely step into the field. DYFI and SFI volunteers stepped into streets when others shut themselves into the safety of their residence. District unit of SFI started sanitizing the streets allotted by the local administration. DYFI started distributing groceries and supply to the needy.
While Vikey, Jana and other volunteers of SFI were busy sanitizing, identifying the needy, assisting the abandoned  DYFI was forcefully distributing goods, spreading awareness among the community.
Balaji
Balaji is a graduate teacher of English, at Perungudi Government High School, Pudukkottai. During this unexpected, unprecedented Covid-19 disaster he did a unique relief operation. Everyday he prepared food for 80 members, which is handed over to volunteers from Thunaivan and Prabaharan Puratchi Vithaikal. His entire family got involved in the meal preparation, his father Mr. Raju, his mother Mrs. Santha Raju, and his better half Mrs. Sudha Balaji, all put their efforts in the preparation.
The selfless service of this family inspired their neighbors and the started to provide supplies, and this operation continued for 31 days. After the initiative of Balaji  inspired almost all his friends and most them sponsored a days meal.
What a great feat!
POPS
POPS (Porantha Oorukku Pukazhacheru)
POPS is known for the extraordinary service through out the district, started to campaign against the Eucalyptus Plantation, planting new saplings around the neighborhoods of Pudukkottai this team has carved its name for its unique community development activities.
This organization had distributed masks, relief goods around the district.  POPS had also watered the saplings at the East Main Road of the town during this lockdown.
Iyarkkai Manikandan
Iyarkkai Mani is Organic Farming Activist, the brain behind the district's Organic Food Restaurant "Nilachoru", had gathered the abandoned old people around the district and camped them in the Old Age Care center of  the Municipality, he provides them medical care and necessary items along with meals. He was active in the field since the very first day of the lock down.
Iynkaran Arunmozhi 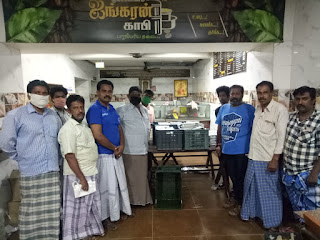 Pudukkottai Arunmozhi is extraordinarily popular for his social welfare activities. During this lock down he reached the remote villages and supplied meals and other necessary items to the villagers. He had also provided Shahar meal for the fasting Muslims during this Ramadan. He had taken care of the cattle abandoned on the roadside.
Corona Care Givers
SriMalai
SriMalai, one of the founders of Vithaikkalam, did something unusual as usual, he formed a whatsapp group called "Corona Care Givers" through which he gathered funds and materials and supplied them to the volunteers on the ground. Thiruppathi, Pudugai Selva, Narayanan, Abudl Jaleel, Cashmeer Raj were among the volunteers in the group who worked on the field.
Devatha Tamil
A poet, who dared to announce her SB Account number to collect funds for the Whatsapp Group CCG. She is known for her active participation in Literary Association and Welfare Activities. She had collected funds and made CCG possible.
Her daughter Nila had developed an app to gather the form produce and to sell them to the consumers who were afflicted by the lock down. Really a laudable idea.
Cashmeer Raj 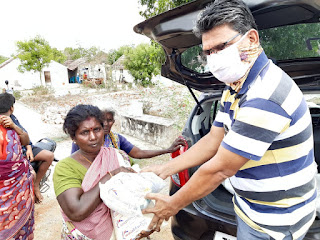 A computer service and installation veteran, Mr. Cashmeer Raj is a humble soul which involves in great feat. For once he sponsored an MCA degree candidate, who is now in abroad. His simple assistance had changed a young man's life. When the candidate was about to return his financial assitance, Cashmeer simply refused  to get it, he asked him to find another suitable candidate and assist him!
He was strictly advised by his doctor not to step out from his home, but he dared to serve in the field supplying the necessary food items and goods to villages around Pudukkottai. Ellaippatti, Sirunjunai, Vidivagam and Mettuppatti were some of the villages he had served.
Masthaan Baguruthen
Serving as a graduate teacher at Maruthanthalai Higher Secondary School he had a habit of paying the fees for the higher education of the underprivileged kids. He spends almost his entire salary to this purpose. During this Covid-19 lock down  had had provided two villages with all the necessary materials. Young volunteers Jerald and Yousuf were on the field assisting him.
TAMS Pudukkottai
TAMS is a teacher welfare federation which leaps to the field during every disaster, assisting the  needy. The Pudukkottai Factor of the organization had gathered money and distributed relief materials. The District President, Mr.Rajangam, along with office bearers Raja, Mugesh, Palraj, Vijayamanicam, Jothibasu, Naygam and Masthan Bagurutheen took part in the event.
Covid-19